THE UNLEARNER
NAV
NAV
TOP 10
All Time
1
The Lost Writings of Jim Morrison
2
Salvador Dali Illustrates ‘Alice in Wonderland’
3
The Origin of Edward Munch’s ‘The Scream’
4
22 Rules of Writing a Story the Pixar Way
5
The Building Blocks Of Creativity: Ira Glass On Storytelling
6
Sunday Poem #1: ‘Don’t Blame Anyone’ by Pablo Neruda
7
George Orwell’s 6 Rules For Writing
8
The Yellow Butterfly: Gabriel Garcia Marquez and the Secret to Real...
9
The Beatles Behind the Scenes: Making of ‘Tomorrow Never Know...
10
10 Commandments of Guitar Playing
previous
Sunday Poem #1: 'Don't Blame Anyone' by Pablo Neruda
random
next
Sunday Poem #2: 'I Would Like to be a Dot in a Painting by Miro' by Moniza Alvi
Arts 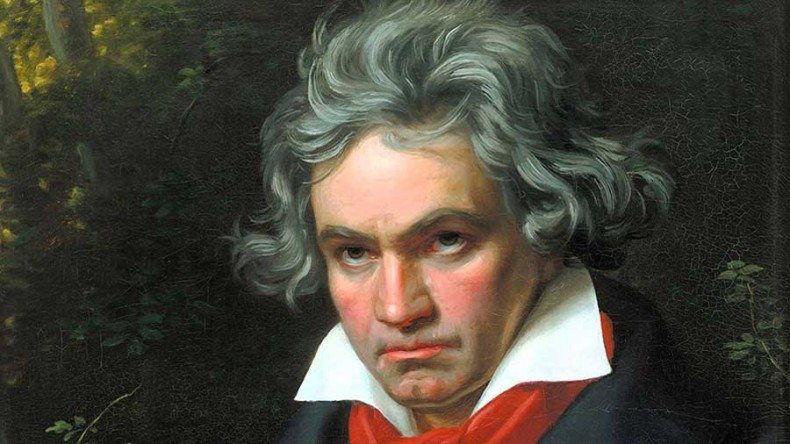 ‘Only art and science raise men to the level of the gods.’

Few creative giants have risen to the spectacular heights of genius and artistic fulfillment as much as Ludwig van Beethoven. Beethoven’s ingenuity is legendary: his prolific works have sealed his place in history as a maestro of immense skill, blazing the trails of sheer musical prowess.

Popular culture has a peculiar habit of feeding into the myth of the tragic artist – through its association between creative genius and suffering – as seen in the case of Vincent Van Gogh, Pablo Neruda or Edward Munch.

But perhaps nowhere is this mysterious link as present or acutely tragic as in the case of Beethoven. Despite his towering accomplishments, Beethoven’s life was marred by personal and professional tragedy. Beethoven suffered a difficult childhood, often at the receiving end of his father’s fury, enduring beatings as a part of his harsh musical training. These years of struggle were later ultimately rewarded by the bloom of his intellectual and creative accomplishment. The whole of Europe was awed by the extent of his genius, and in his own lifetime he came to command tremendous critical and commercial success.

And yet these happy circumstances were not to last long. In one of fate’s cruelest ironies, Beethoven began losing sense of his hearing by the time he was only twenty six years old, later becoming completely deaf. This would come to cast a life-long pall on the great composer, souring his relationships with friends and family, his income, and his own personal happiness. Deeply and profoundly affected by his loss of hearing, Beethoven was driven to the edge of perpetual despair, even coming close to suicide.

Which is why, this correspondence between him and a loyal fan is so extraordinary.The fan in question is Emilie M, an 8 year old girl and pianist in training, who wrote to Beethoven with admiration. She accompanied this letter with a handmade ‘pocketbook’ as a gift to Beethoven. In return, Beethoven responded with a letter of his own, which – in spite of his suffering and his indignity with fate’s vicissitudes – resonates with pure delight and joy.

This remarkable bit of historical correspondence, culled from the book Beethoven’s Letters – offers us a glimpse into the great artist’s mind, which – despite all its sadness – manages to leap beyond from the page, even today, into rising notes of infectious optimism, remarkable humility, and childish delight.

I am sending a late answer to your letter; a mass of business, constant illness must be my excuse.

Your pocket-book shall be preserved among other tokens of the esteem of many men, which I do not deserve.

Continue, do not only practise art, but get at the very heart of it. This it deserves, for only art and science raise men to the level of the gods. If, my dear Emilie, you at any time wish to know something, write without hesitation to me.

The true artist is not proud, he unfortunately sees that art has no limits; he feels darkly how far he is from the goal; and though he may be admired by others, he is sad not to have reached that point to which his better genius only appears as a distant, guiding sun. I would, perhaps, rather come to you and your people, than to many rich folk who display inward poverty. If one day I should come to H., I will come to you, to your house; I know no other excellencies in man than those which causes him to rank among better men; where I find this, there is my home.

If you wish, dear Emilie, to write to me, only address straight here where I shall be still for the next four weeks, or to Vienna; it is all one. Look upon me as your friend, and as the friend of your family.

What is even more remarkable is the fact that Beethoven’s lament of the creative struggle – the gap between a person’s ambition and the actual quality of their output – is just as relevant today, amongst beginners and non-beginners alike. In fact, it poignantly finds an almost word-for-word echo in this remarkable advice from Ira Glass in this modern day and age.

But your taste, the thing that got you into the game, your taste is still killer. And your taste is good enough that you can tell that what you’re making is kind of disappointment to you. A lot of people never get past that phase, and a lot of people at that point they quit. And the thing I would just like to say to you with all my heart is that most everybody I know who does interesting creative work, they went through a phase of years where they had really good taste and could tell what they were making wasn’t as good as they wanted it to be.
They knew it fell short. It didn’t have the special thing that we wanted it to have.

My name is Ruchita and I'm on a quest to be better, smarter and happier. The Unlearner is home to this grand experiment: a curious laboratory full of exciting ideas, great books, and a wealth of resources. Interested? Learn more or join me in this epic adventure.
More Goodness
letters

Vincent Van Gogh on Love, Procrastination, and the Struggle for Meaning

‘Things to Worry About’: F. Scott Fitzgerald’s Advice To His 11 Year Old Daughter
Be the first to comment!
Leave a reply »

70+ Best Free Alternatives to Paid Software
Top 5 Disturbing Philosophical Ideas
OK, so you just graduated. Where the hell do you go from here?
The Brilliance of Vonnegut’s Cat’s Cradle
How to Find Your Life’s Purpose: Advice from John Green
10 Essential Books To Help You Become a Better Writer
Stanley Kubrick and the Meaning of Life
Leonardo da Vinci’s Resume
The Philosophy of Love
A History Of The World In 100 Seconds
TOP 10 All Time
1
The Lost Writings of Jim Morrison
2
Salvador Dali Illustrates ‘Alice in Wonderland’
3
The Origin of Edward Munch’s ‘The Scream’
4
22 Rules of Writing a Story the Pixar Way
5
The Building Blocks Of Creativity: Ira Glass On Storytelling
6
Sunday Poem #1: ‘Don’t Blame Anyone’ by Pablo Neruda
7
George Orwell’s 6 Rules For Writing
8
The Yellow Butterfly: Gabriel Garcia Marquez and the Secret to Real...
9
The Beatles Behind the Scenes: Making of ‘Tomorrow Never Know...
10
10 Commandments of Guitar Playing
MUST READ
YOU NEED TO READ
THIS NOW
Full Story
NEWSLETTER!
Bite-sized smarts