Richard Feynman: What Is Science? 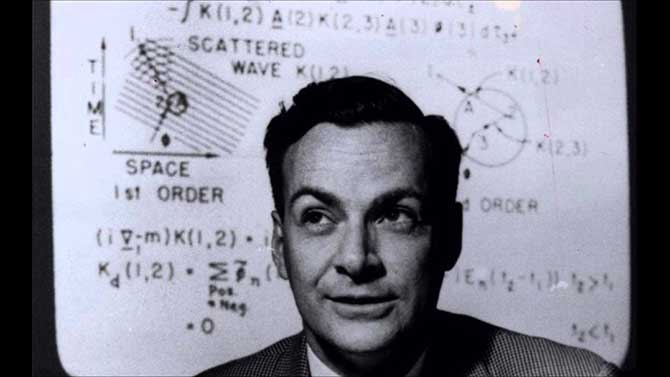 “I learned then what science was about: it was patience.”

Richard Feynman – brilliant scientist, fantastic teacher, bongo drummer extraordinaire, practical joker, and a perpetually curious mind – was also well known for articulating his love and passion for science (Surely You’re Joking, Mr. Feynman!, The Pleasure of Finding Things Out). His enthusiasm for the subject and for teaching was legendary, and infectious.

In this speech given at the at 15th annual meeting of the National Science Teacher’s Association in 1966, Feynman expounds on ‘What is science?’, beautifully articulating his love and passion for the subject, as well as what drives his curiosity and his philosophy on teaching.

I think it is very important – at least it was to me – that if you are going to teach people to make observations, you should show that something wonderful can come from them. I learned then what science was about: it was patience. If you looked, and you watched, and you paid attention, you got a great reward from it – although possibly not every time.

As a result, when I became a more mature man, I would painstakingly, hour after hour, for years, work on problems – sometimes many years, sometimes shorter times; many of them failing, lots of stuff going into the wastebasket – but every once in a while there was the gold of a new understanding that I had learned to expect when I was a kid, the result of observation. For I did not learn that observation was not worthwhile.

[…]
It should not be “science has shown” but “this experiment, this effect, has shown.” And you have as much right as anyone else, upon hearing about the experiments–but be patient and listen to all the evidence–to judge whether a sensible conclusion has been arrived at.

My name is Ruchita and I'm on a quest to be better, smarter and happier. The Unlearner is home to this grand experiment: a curious laboratory full of exciting ideas, great books, and a wealth of resources. Interested? Learn more or join me in this epic adventure.
More Goodness
richard feynman

The Symphony of Science: A Musical Tribute
Be the first to comment!
Leave a reply »

70+ Best Free Alternatives to Paid Software
Top 5 Disturbing Philosophical Ideas
OK, so you just graduated. Where the hell do you go from here?
The Brilliance of Vonnegut’s Cat’s Cradle
How to Find Your Life’s Purpose: Advice from John Green
10 Essential Books To Help You Become a Better Writer
Stanley Kubrick and the Meaning of Life
Leonardo da Vinci’s Resume
The Philosophy of Love
A History Of The World In 100 Seconds
TOP 10 All Time
1
The Story Of Everything: Carl Sagan’s Classic Wisdom
2
Must Watch: The Most Astounding Fact About the Universe
3
Richard Feynman: What Is Science?
4
19th Century Chemistry and Exploding Shampoos
5
Death By A Black Hole
6
The Symphony of Science: A Musical Tribute
7
Albert Einstein: How I See The World
8
Journey to the Edge of the Universe
9
How Many People Can Live On Planet Earth?
10
Richard Dawkins and Neil DeGrasse Tyson’s ‘Mutual Tutor...
MUST READ
YOU NEED TO READ
THIS NOW
Full Story
NEWSLETTER!
Bite-sized smarts