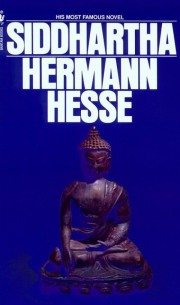 Examining Herman Hesse’s philosophical treatise and the ideas it contains

Siddartha is an allegory; a story wrapped around the ultimate premise ‘Happiness for Dummies’. Originally published in 1922, the book came to achieve great cultural significance in the 1960s and is today counted amongst one of Herman Hesse’s finest works.

Like its eponymous protagonist, the novel breaks down in several milestones or turning points that signal the development of the story and the growth of the character. This marks the changes that have been wrought at each stage by happenstance or when the central character experiences, what they generally call, an ‘awakening.’

Now, I have generally never been fond of that word; I look upon it with slightly cynical eyes that have been tainted long ago with the endless and ubiquitous New Age slogans and advertising jingles and other such byproducts of a spiritually-hungry-but-commercially-eager-to-cash-on-in-that-hunger culture that is so pervasive. For that reason, any word (especially buzzwords like awakening, purpose, destiny, soul – to name just a few, which must surely count as eternal favourites of those who specialise in Spiritual Quests) – any word bearing resemblance or connection to this New Age school of thought immediately props up red flags in my mind and, in response to that, my mind reciprocate my sentiments with a certain two-syllable word, namely, ‘bullshit’.

However, being as wary of this as I am, I am compelled to acknowledge that Siddhartha does not bear resemblance to those works proffering liberation and claiming to offer answers to your spiritual questions, at least, not in the typical sense. Hesse is not trying to sell you happiness in a How-To-Guide book form wrapped with a ribbon on top. Hesse isn’t trying to sell you anything. What he is doing, though, is telling a story that puts this search, this spiritual hunger in an allegory form to examine the way it comes about and the way it is resolved. 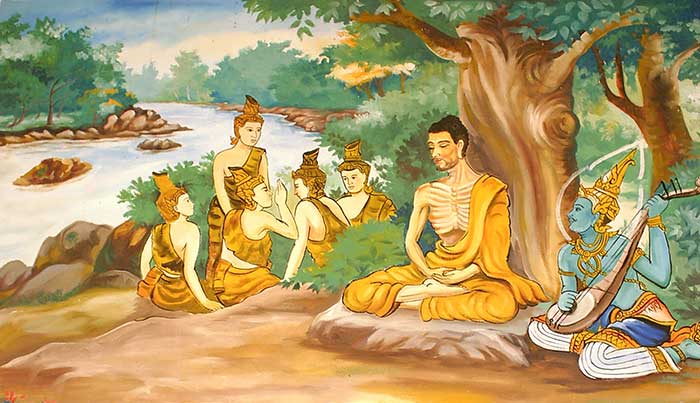 We must put Siddhartha in its historical context to achieve a full perspective towards understanding this work. A winner of the Nobel Prize for Literature in 1946, Herman Hesse was a German-born Swiss writer whose books are characterized by self-inquiry and the search for meaning. His parents had served as Christian missionaries in India. Hesse’s exposure to the work of Arthur Schopenhauer, the German philosopher, renewed his interest in Indian culture. His work is informed with tenets of Buddhist and Hindu philosophy and, in the case of Siddartha, forms the setting of the story itself.

Siddhartha is important because, published in 1922, way before the Beat movement and the hippiedom of the 60s, it was the first major work dealing in Eastern philosophy and thought written in the West. What many of the world now knows or may appreciate as Buddhist/Zen philosophy as a school of thought, Siddhartha put forward first. Hesse influenced the work of Jack Kerouac, and many others of the Beat Generation ahead of its time. It witnessed a resurgence in the counter-culture movements of the sixties.

Hesse examines the search for spiritual fulfillment by having his characters embody aspects of personality and living that are unified, at various stages, by the protagonist Siddhartha himself. Govinda, like Siddhartha, is a seeker and then a Samana, or an ascetic who has renounced all wordly possesions. Kamala, the woman who instructs Siddhartha in the art of physical love and later, the mother of his child, embodies hedonism and sensuality. Kamaswami, the merchant, signifies the chief example of the ‘child people’, the materialist. The ferryman, Vasudeva, exemplifies quiet understanding and wisdom, just like the Gautama Buddha, the Sublime One.

At various stages of his life, Siddhartha experiences the different aspects of these different personalities himself; he changes and grows as a person by becoming and unbecoming these traits. He is first and foremost, a seeker, who leaves his home to become a Samana, an ascetic giving up the ways of ‘the child people’. He is then the lover, basking in the pleasures of love and sex. Then he is the trader, the materialist, consumed by worldly woes. He is the gambler, giver and taker of riches, losing sight of what he was before. Then he is the suicidal depressive who has reached a breaking point, a crises in life, realised that the journey he traced out until this point left him empty, hollow, broken. Then he is the awakened, the conscious, the curious. He is the child, the born-again once more, who laughs to himself realising that he has been given a blank slate to begin anew. 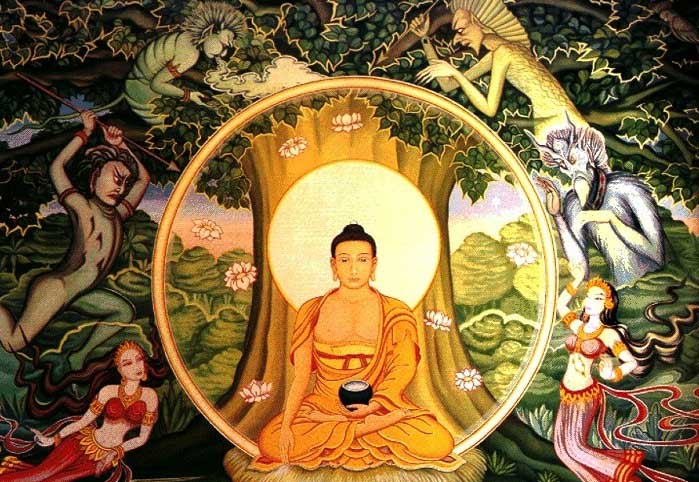 Siddhartha’s journey is one of trial and error. He sets of with the one goal of escaping the ‘ego’, the vanquishing of the Self to achieve oneness with the universe, the Brahman. Yes, that sounds a bunch of wish-washy terms strung together to sound fancy. Admittedly, they wouldn’t look that great on a resume, or seem out of place in daily conversation. ‘What do you want to do with your life?’ ‘Oh, you know, just vanquish the Ego and stuff…and become one with the Universe. Can you pass the ice-cream, please?’ Yup. However, let’s give the Brahmin kid a break.

To that end, he traces out a path that wavers between two extremes – two opposite paths that might lead to one destination that is his goal. The first path, of course, is the one of renouncing of the worldly wealth, the path of the Samanas, the path of hermits, one of patience and fasting and suffering and simple living to overcome material wants and excesses. Siddhartha sets off and then departs from this path, thinking it inadequate. He wounds up in a town where he meets Kamala the courtesan who instructs him in the art of love. He embarks on a second path, directly opposite to his former one: instead of giving up pleasures and possessions, it encourages him to pursue them with active desire. When it turns out that this was not working either, Siddhartha runs away from it too and reaches that dreaded dead-end, suicide. This breakdown is the culmination of another lesson, heralding a new beginning, a clean start.

Siddhartha’s mistakes are numerous and his teachers many; from his Samanas, the Buddha, Kamala, Kamaswami, the ferryman, and ultimately the river. His loves, much like his paths and means to the journey of fullfilment, know many faces and forms. At one point in the novel, Siddhartha asserts to Kamala: ‘Maybe people like us cannot love,’ and yet in time he himself comes to experience the many aspects of life. He knows platonic love, in relation to his best friend Govinda, brotherly love suffused with profound respect to Vasudeva, romantic love to Kamala, and familial, fatherly but unrequited love to his son.

Compared to other books tackling existential angst such as the likes of The Stranger by Albert Camus, or Crime and Punishment by Fyodor Dostoyevsky, Siddhartha is different in that it is uplifting and somberly optimistic in tone. Hesse’s prose is languid and flowing, with a tendency to become simple at times, but not simplistic. The central message of the novel is exemplified in the final meeting of Siddhartha and Govinda, fraught with the difficulty of Govinda seeking to glean understanding from the learning of Siddhartha, and Siddhartha asserting its impossibility: Wisdom cannot be taught. Knowledge can be passed on, but wisdom cannot. That Siddhartha spent his entire life trying to learn it himself, and made many mistakes along the way, but fumbling and falling, made it through, underlies this claim.

Different people will interpret novel differently. Some think it changed their life. It didn’t change mine. But it gave me some nice things to think about.

My name is Ruchita and I'm on a quest to be better, smarter and happier. The Unlearner is home to this grand experiment: a curious laboratory full of exciting ideas, great books, and a wealth of resources. Interested? Learn more or join me in this epic adventure.
More Goodness
book reviewcritical inquiry

The Philosophy of Love

Philosophy Primers: Sophie’s World
Be the first to comment!
Leave a reply »