THE UNLEARNER
NAV
NAV
TOP 10
All Time
1
Bertrand Russell: ‘What I Have Lived For’
2
Stanley Kubrick and the Meaning of Life
3
Philosophy Posters: Re-imagining Existentialism, Nihilism, Solipsis...
4
How Pablo Neruda Came to Write His First Poem
5
Vincent Van Gogh on Love, Procrastination, and the Struggle for Mea...
6
Leonardo da Vinci’s Resume
7
Isaac Asimov On What Intelligence Really Is
8
Young Isaac Newton’s ‘List of Sins’
9
Remembering Anne: Rare Video Footage of Otto Frank
10
Learning Out of Books vs a Traditional Education
previous
Philosophy Posters: Re-imagining Existentialism, Nihilism, Solipsism, and More
random
next
Stanley Kubrick and the Meaning of Life
Culture

Bertrand Russell: ‘What I Have Lived For’ 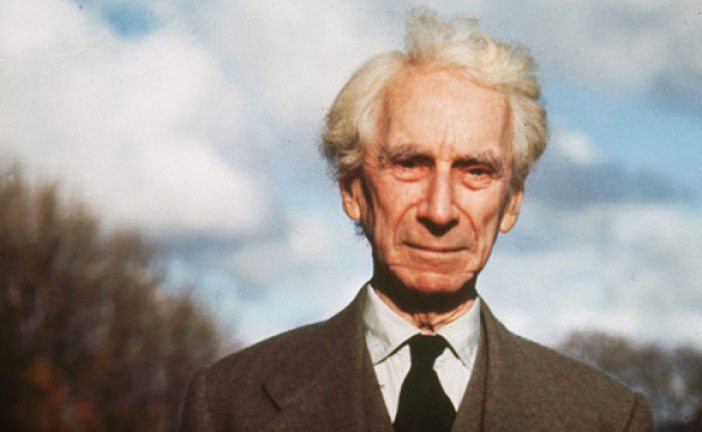 Bertrand Russell (1872-1970) – philosopher, mathematician, pacifist, political activist, and author of A History of Western Philosophy and Principia Mathematica, among many others – has arguably the most beautiful prose as well as the strongest clarity of thought since any philosopher before or after him. Russell’s works have majorly impacted the Western philosophical tradition and remain as modern classics.

Bertrand Russell was a thinker far ahead of his time. His ideas, even today, retain their fervour, and their timeliness – it may even be said, perhaps, that they are now more timely than ever. At a time when battlelines were being drawn at home in Britain and abroad, Russell was at the crux of philosophy and activism: he spoke out on important issues, most strongly on the issue of war, and he even went to prison because of his outspoken pacifism during the first World War. Russell spearheaded religious scepticism and critical thought with his works – most notably, Why I Am Not A Christian – and, later, was instrumental in the establishment of the Campaign For Disarmament.

Bertrand Russell’s autobiography reigns as one of the most important books he ever wrote. The Autobiography of Bertrand Russell expresses, and does so beautifully, Russell’s ideology and ideas, with characteristic wit and sharpness of thought. The prologue to this autobiography contains a summing up of his beliefs, in three succinct passions, beautifully articulated, and appropriately titled ‘What I Have Lived For.’ The manuscript to this prologue, written in Russell’s own hand, and its transcript follows. 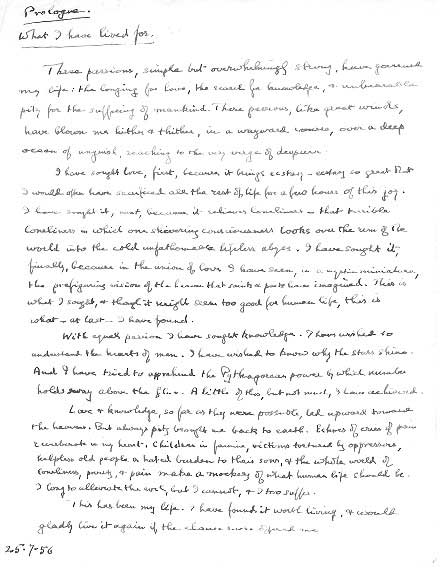 The prologue to Bertrand Russell's autobiography: 'What I Have Lived For'

What I Have Lived For

Three passions, simple but overwhelmingly strong, have governed my life: the longing for love, the search for knowledge, and unbearable pity for the suffering of mankind. These passions, like great winds, have blown me hither and thither, in a wayward course, over a great ocean of anguish, reaching to the very verge of despair.

I have sought love, first, because it brings ecstasy – ecstasy so great that I would often have sacrificed all the rest of life for a few hours of this joy. I have sought it, next, because it relieves loneliness–that terrible loneliness in which one shivering consciousness looks over the rim of the world into the cold unfathomable lifeless abyss. I have sought it finally, because in the union of love I have seen, in a mystic miniature, the prefiguring vision of the heaven that saints and poets have imagined. This is what I sought, and though it might seem too good for human life, this is what – at last – I have found.

With equal passion I have sought knowledge. I have wished to understand the hearts of men. I have wished to know why the stars shine. And I have tried to apprehend the Pythagorean power by which number holds sway above the flux. A little of this, but not much, I have achieved.

Love and knowledge, so far as they were possible, led upward toward the heavens. But always pity brought me back to earth. Echoes of cries of pain reverberate in my heart. Children in famine, victims tortured by oppressors, helpless old people a burden to their sons, and the whole world of loneliness, poverty, and pain make a mockery of what human life should be. I long to alleviate this evil, but I cannot, and I too suffer.

This has been my life. I have found it worth living, and would gladly live it again if the chance were offered me.

My name is Ruchita and I'm on a quest to be better, smarter and happier. The Unlearner is home to this grand experiment: a curious laboratory full of exciting ideas, great books, and a wealth of resources. Interested? Learn more or join me in this epic adventure.
More Goodness
bertrand russellfeatured

Bertrand Russell’s 10 Rules for Living
Be the first to comment!
Leave a reply »