THE UNLEARNER
NAV
NAV
TOP 10
All Time
1
A Critical Inquiry Into: Heinlein’s Stranger in a Strange Land
2
Philosophy Primers: Sophie’s World
3
A Critical Inquiry Into: Herman Hesse’s Siddhartha
4
10 Essential Books To Help You Become a Better Writer
5
The Joy of Books: a Love Letter in Stop Motion
6
The Philosophy of Love
7
Moonwalking with Einstein: The Art and Science of Remembering Every...
8
The Brilliance of Vonnegut’s Cat’s Cradle
9
Why Old Books Smell
10
J.R.R. Tolkien’s Magnificent Original Drawings for The Lord o...
previous
Why Old Books Smell
random
next
The Philosophy of Love
Books 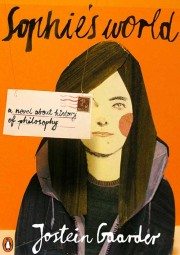 From Plato to Marx, a journey through 3,000 years of philosophy

Karl Marx once famously accused philosophers of describing the world and failing to change it. ‘Philosophers have only interpreted the world,’ he claimed, not changed it. In Sophie’s World, Norwegian author Jostein Gaarder answers this claim by showing how ideas, and the people behind them, have consistently shaped and changed the course of history in a grand, sweeping narrative that encompasses 3000 years of philosophy and, at the same time, packs a mind-bending, action driven plot at its heart.

The book, originally written in Norwegian, is set in modern day Norway, and revolves around Sophie Amundsen, a soon-to-be fifteen year old school girl. One day, Sophie returns from school to find two mysterious letters in her mailbox. Two single scraps of paper with a single sentence scribbled on each of them: Who are you? and Where does the world come from?

The writer of the letter is an enigmatic philosopher, Alberto Knox, whose abrupt, throwaway questions reveal themselves to Sophie as not throwaway or casual at all, but important questions that scream out for answers. As Sophie sets her mind on trying to tackle these questions, she discovers it’s only the beginning: it sparks the philosophical correspondence with Alberto, and an entire world of philosophy opens up before her.

As the correspondence grows, the letters begin tackle ideas and people from the beginning of antiquity to modern and post-modern thinkers. Thales, Anaxagoras, Socrates, Plato, Aristotle set off the introduction to Greek philosophy. The letters then traverse through the beginnings and crossovers of civilization, middle ages and Renaissance philosophers, right until our own day.

Gaarder cleverly manages to intersperse the letters while still getting the narrative going – he is careful to not let the letters sidetrack the reader into thinking it a philosophy textbook. He achieves this feat by ingenious plotting of the narrative in twists and turns that spring up every now and then, leaving the reader speculating about what happens next. Gaarder makes use of story telling techniques even when he has the character expound on the difficult ideas of the great thinkers past, and this, combined with characterization and the element of mystery that he suffuses the whole novel with until the last page, is what keeps the reader turning the pages.

As the story progresses, the plot thickens further as Gaarder unfolds the narrative being extremely layered, as opposed to the deceptively simple arc he creates in the beginning. This is when things start to get interesting, as we draw closer and closer to the mystery of Alberto Knox and Sophie and her world itself. Gaarder brings surrealist elements in the foray and there are times when the reader might have to do a backflip for want of necessitating the ability to differentiate between dreams and reality in the book: between the abstract and the concrete, between the past and the present.

All in all, Sophie’s World serves as a very good gateway to dive into the world of philosophy, it adeptly handles the treatment of 3000 years of philosophy in 400 pages. The climax with its final delivery of the long awaited revelation will catch you unawares.

A philosophical adventure that blends story-telling with the history of philosophy. Makes for entertaining reading and will make you think.

My name is Ruchita and I'm on a quest to be better, smarter and happier. The Unlearner is home to this grand experiment: a curious laboratory full of exciting ideas, great books, and a wealth of resources. Interested? Learn more or join me in this epic adventure.
More Goodness
book revieweditor's pick

The Philosophy of Love
comments
Leave a reply »